George and Mary Barter, Managing Director Tom Randles and all their staff hosted some 200 guests on Thursday 7th May 2015 when Tom MacSweeney officially opened the exhibition, which was organised with the assistance of interns Cidalia Ribeiro and Hayden Doyle. Addressing the guests, George Barter said: “Late last year our managers met to plan for our 150th anniversary this year and after discussing the usual competitions and giveaways someone said that there should be some interesting documents about, so I foraged through the family vaults and suitcases etc. – we are hoarders! “I then asked some experts to look at them and their assessment was that they were worth doing something with and the Cork Vision Centre kindly obliged with the venue for this exhibition. I would also like to thank Portuguese Tourism, Celebrity Cruises, Cork Airport and CIE/Irish Rail for their support, and Tom MacSweeney for being here to open the exhibition. There is a goody bag for everyone as you leave and 12 lucky people will also find tickets for two to visit Celebrity’s Silhouette when she visits Cobh on 12th June! “We chose today, Thursday 7th May 2015, for the official opening without realising the date’s significance – the 100th anniversary of the sinking of the Lusitania. 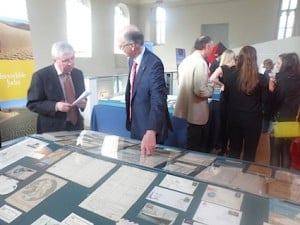 Tom MacSweeney, who opened the exhibition, is shown the exhibits by George Barter 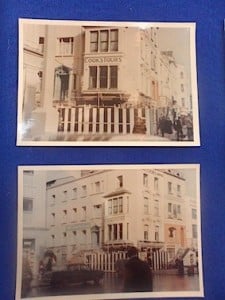 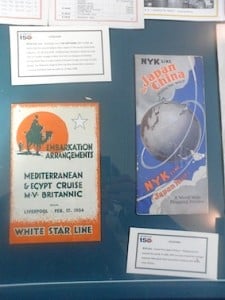