Irish Travel Trade News applauds the innovative and worthy initiative introduced by Dave Walsh and supported by six leading suppliers in the industry to hold an Irish Travel Trade Charity Family Fun Day, which will take place at the ALSAA Sports Club on Saturday 1st September 2012. The event will raise funds for the Irish Cancer Society and Pieta House, which provides a programme to prevent self-harm and suicide.

The event on Saturday 1st September will start at 1.00pm at the ALSAA Sports Club, Old Airport Road, Toberbunny, Dublin Airport and will include a 5K Fun Run, a 5-a-side Football Competition, and a family fun day with novelty activities for all ages, such as egg-and-spoon racing, sack racing and non-stop fun for children and adults with bouncy castles, inflatable sumo wrestling, giant Jenga, etc – and a barbeque, ice-cream and refreshments to keep the energy levels high!

For registration details and sponsorship cards for everyone to join in the fun, or donate, visit www.travelfunday.ie. There will be prizes and medals for the children and all participants and attendees will have a chance to win a host of exciting prizes such as flights and holidays. They are on their marks – but not on their starting blocks!

The charity event has been put together by members of the travel industry from all over Ireland. The initial idea was put forward by Dave Walsh and quickly received enthusiastic support from Blue Insurances, Etihad Airways, Royal Caribbean International, Sunway, Travelport, and United.

To launch the event, representatives from these companies were joined at ALSAA by TV travel programme presenter Kathryn Thomas.

It is hoped that more Irish travel trade suppliers will join in the effort and that support from sponsorship, fundraising and attendance on the day will help to make this charity event an annual fixture in the all-Ireland industry calendar. In the early 1960s, a well-known Irish physician, Prof Austin Daragh, was appalled to learn from statistics that 100 Irish people died each year from non-melanoma skin cancer. What was really shocking was the fact that these cancers were visible and 100% curable, so 100 people a year in Ireland died because they did not know what to do. They lacked the knowledge that could have saved them from unnecessary suffering and death. When Prof Daragh shared this fact with some friends they decided to establish the Irish Cancer Society.

“Since 1963 the Irish Cancer Society has grown into the national charity for cancer care, the leading provider of all information relating to cancer prevention, detection, treatment and support. We also advocate for improvements in cancer services and we are the largest voluntary funded of cutting edge cancer research in Ireland.

“We rely on the generosity of the public for 95% of our income. Our fundraising initiatives are managed by our fundraising team and a huge base of volunteers, champions and campaigners in every corner of Ireland.

“Our vision is that every person in Ireland will have access to the best possible cancer services, and will have the lowest risk of getting cancer, the highest survival rates and the best support and information available when affected by cancer.

“Our goals are focused around prevention, early detection and fighting cancer, with three programme areas to achieve them: advocacy, cancer services and research.

“It is estimated that approximately 29,000 new cases of cancer will be diagnosed in Ireland this year and 42,000 new cases by 2020. Cancer is a disease that knows no boundaries and has or will affect us all either directly or indirectly during our lifetime.”

Pieta House is a non-profit organisation providing a specialised treatment programme for people who have suicidal ideation or who participate in self-harming behaviors. Its service is free of charge and 80% of its income comes from fundraising events and donations.

“Pieta House, set up in 2006, was the first centre in Ireland that specialised in the prevention of self-harm and suicide. Pieta is an alternative way of helping people in crisis, but it is also a way that encourages collaboration with hospitals and doctors. We are all born with an innate desire to survive.  As humans our instinct is to live and avoid pain, and our struggle is mainly about self-preservation. That is why suicide and self-harm seem not only terrifying but also inexplicable. It is probably why both are rarely spoken about. Suicide is still a taboo subject, while self-harm is normally consigned to sensationalist story lines on melodramas or labelled as being eccentric behavior of some celebrities.

“On top of that, there has never been any focused attention paid to it or any focused therapy created for the behaviour.  Before Pieta, people who were suicidal would often end up either in hospital, in a psychiatric unit or heavily medicated – sometimes all three. In many cases, patients were put on ‘suicide watch’, a procedure that involves the patient being watched by a nurse or carer every moment of every day – even while having showers or using the toilet. In some cases, this was the only way to guarantee the patient’s safety – there was no alternative, and whether we liked the practice or not, lives were saved. However, we were convinced that there had to be some other way of helping people who were suicidal.” Naomi Byrne, Sinead Reilly and Dave Walsh, all from Travelport 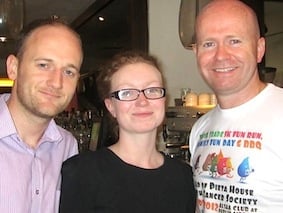