Guests of One Stop Touring Shop at the 21st Irish Travel Trade Awards will include agents from Mallow Travel, Travelworld and Fahy Travel, who were the regional winners of a countrywide Best Dressed Window competition organised by 1STS. Sharon Jordan, Business Manager, One Stop Touring Shop, said: “I am always looking for new ways to engage with travel agents and that’s how our Best Dressed Window competition came about. Initially we were offering a night out with our 1STS team in a restaurant of the winner’s choice. However, when we heard that the travel industry ‘Oscars’, the Irish Travel Trade Awards, were celebrating their 21st anniversary this year, and changing the event back to a black tie, we immediately altered the competition and decided to host the winners at this glamorous evening instead.

“The overall winners, Mallow Travel, are closing their office early on Friday 30th November and joining us for what is shaping up to be a fun filled and exciting event. What’s more the two runners up, Travelworld and Fahy Travel, are also joining us on the table – and we look forward to seeing the ITTN team there!” 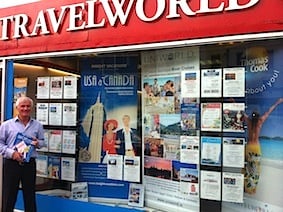 Carole Carmody, Marketing & PR Executive for 1STS, added: “Gearóid Lynch pushed it over the edge by dressing as a German at Contiki Oktoberfest and jumping into his own window to add to his display! Well done to him and the team at Mallow Travel. The 1STS girls look forward to hosting them all at the Irish Travel Trade Awards, including an overnight stay at the wonderful Burlington Hotel!

“The two runners-up, Fahy Travel in Galway and Travelworld in Dublin, both put together outstanding windows and we thank them for joining in the fun by supporting Insight Vacations, Uniworld and Contiki. We are delighted to offer them both a spot each at the Irish Travel Trade Awards for all their hard work.”

Here’s a selection of other entries:

Fionn Davenport
Previous articleEntrepreneur of the Year – Who Will it Be?
Next articleYvonne Wins the Luxury Trip to Malta

Explore the Bay of Palma – Mallorca

Explore the Bay of Palma – Mallorca