The award honours the innovation and contribution to the Irish travel industry made by an individual selected by the Irish Travel Trade News team. Michael Flood, Editor, ITTN, said: “The ITTN Industry Achievement Award was introduced three years ago. In 2014 there were joint winners – John Cassidy and John Spollen of John Cassidy Travel, in 2015 the honour went to Tanya Airey of Sunway, and last year’s winner was Gonzalo Ceballos of the Spanish Tourist Board. “This year’s winner has, over several decades, built-up a multi-award winning company that offers the Irish travel industry a wide range of products, two of which are widely regarded as the market leaders in their respective sectors. His company is an independent, wholly Irish-owned tour operator and family business. Yes, by now you may have guessed that the winner of the 2017 ITTN Industry Achievement Award is…Tony Collins, Topflight!” 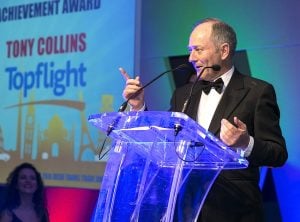 “If I had known about this, I would have a prepared speech in my pocket!” says a surprised Tony Collins