“The House of the Virgin Mary in Turkey is one of the most sacred places for Christianity and is very popular with tourists,”writes Joan Scanlon, Head of Sales & Operations, Wings Abroad Holidays. “In the hills above Ephesus, there is a small chapel that was built on the site where the Virgin Mary lived after the death of Jesus, and where she remained until her own death, praying in solitude.

“The chapel has two rooms, one for Christians and one for Muslims, because both religions view her as an important holy person and Muslims recognise her as the mother of the Prophet Jesus. The house became a Catholic shrine in 1896. Both rooms are open to everyone – just be quiet and respectful of anyone praying. 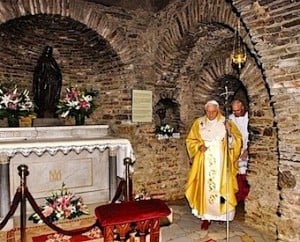 Pope Benedict at the House of the Virgin Mary, Ephesus, Turkey

“Today many visitors from all over the world flock to the shrine. There is water that is believed to be holy water, and can be drunk by anyone, and is believed to provide health, love and wealth. The spring water is also believed to have healing properties. You can also see the ‘wall of wishes’ where visitors write their wishes on pieces of paper and attach them to the wall.

“The House of the Virgin Mary is a ‘must’ visit during your client’s holiday to Turkey!”