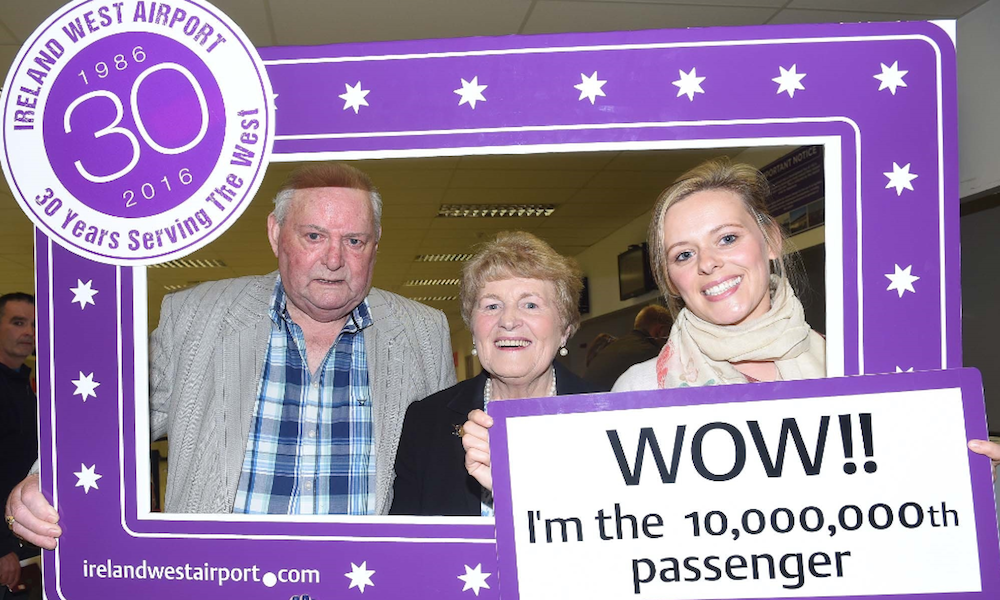 On Friday 1st July 2016 Ireland West Airport welcomed the 10 millionth passenger to use the airport since it officially opened in 1986.

Lorna Conway, from Athlone, who was travelling to Edinburgh with Flybe for a wedding, with her parents, Seamus and Margaret, was the lucky 10 millionth passenger and on checking in for her flight was greeted with champagne, a specially designed Lily O Brien’s gift hamper, and a pair of return flights to Edinburgh, to mark the occasion.

“I am overwhelmed and completely surprised; this is a fantastic way to be greeted at check-in for my flight to Edinburgh,” she said.

Joe Gilmore, Managing Director, Ireland West Airport, said: “We are privileged to welcome our 10 millionth passenger to pass through Ireland West Airport. In 1986 the airport carried, in total, just over 9,000 passengers, and it is a fantastic achievement for all to be celebrating a milestone of our 10 millionth passenger, particularly poignant given that this is the 30th anniversary of the official opening of the airport.

“It is a very proud milestone to reach and a testament to the importance of the airport for not only people in the West and North West but also for those overseas visitors who want to fly directly into the heart of the West of Ireland. I would like to take this opportunity to thank the airport staff in particular for their hard work and support in achieving this significant milestone for the airport and we look forward to many more milestones in the coming years.”