Ireland is a Key Part of RCI’s Plans

Ireland is a Key Part of RCI’s Plans

“This is my second trip to Ireland in three weeks – which should tell you that I see Ireland as a key part of our plans,” Ben Bouldin, newly appointed Director of Sales, UK & Ireland – who joined Royal Caribbean International on 6th January 2014 after 15 years in senior roles at PepsiCo International – said when interviewed in Dublin last month by Neil Steedman, ITTN’s News & Features Editor. 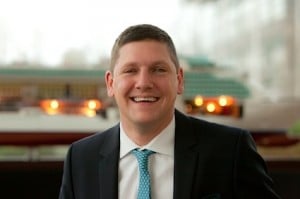 Ben also revealed that he had never been on a cruise, but that his parents have become cruisers in recent years, so ITTN suggested that, before everyone in the company gets to know his face, he should go to Miami, adopt an American accent, and take a short ‘mystery cruiser’ trip. He liked the idea.

Ben leads an 18-strong sales team dedicated to the Royal Caribbean International brand. The addition of the new role, and an expanded sales and marketing team purely working on RCI, follows the decision in late 2013 by RCL Cruises Ltd to change its UK and Ireland business structure. Managing Director Stuart Leven joined RCI in October 2013 and Ben works alongside Jo Briody, Director of Marketing and PR, and is supported by Steve Williams, Head of Sales.

“Royal Caribbean has been a little complacent over the past 18 months,” said Ben. “Deployment changes out of Malaga and Palma have affected Irish numbers, there is more competition in this market – and we have lost some business to others. We have to find a way of increasing the total cruise cake – because our main competition is non-cruise all-inclusive holidays.

“I want to see more PR activity, both consumer and trade, and some great news is coming in the coming months.” (Yesterday, RCI announced ‘Golden Tickets’ for 20 agents to attend the re-positioning of Allure of the Seas into Barcelona in May 2015.) “We are looking at the ex-Ireland flights scenario – our €99 add-ons for the Med is tactical pricing, for example – and we will be inviting agents and media on to the Legend of the Seas on 20th April and the Brilliance of the Seas on 11th May and 3rd September when they call into Cork.

“Over the coming months I want to identify how we work best with the trade. We need to ‘re-invigorate’ the Royal Caribbean brand, working with Jenny Rafter and Jennifer Callister, and to promote the comprehensive range of facilities that our ships offer.”