Yesterday, Emirates celebrated the unveiling of the 1,000th Boeing 777 during a special event at the manufacturer’s plant in Everett, Washington State, USA. Emirates is the world’s largest operator of the Boeing 777 and the landmark aircraft will become the 102nd to join the airline’s B777 fleet, when it is delivered later this month. 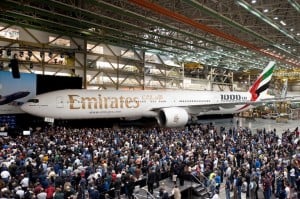 The factory celebration was attended by more than 5,000 Boeing employees, suppliers and government officials, including HH Sheikh Ahmed bin Saeed Al-Maktoum, Chairman and Chief Executive, Emirates Airline & Group, a delegation of dignitaries from the UAE, and senior Emirates executives.

“Emirates is honoured to be the recipient of Boeing’s 1000th 777, an aircraft whose advanced, long range capacity has been instrumental to our success in becoming a truly global airline,” said Sheikh Ahmed. “Emirates is already the world’s largest operator of the Boeing 777 and our order for an additional 93 is further testament to our belief in the product and the role this aircraft will play as we build our fleet for tomorrow and further establish Dubai’s position as one of the world’s leading air travel hubs.

Emirates, the largest airline in the world in terms of international Revenue Passenger Kilometres, now flies to 122 destinations worldwide. In addition to the 1,000th B777 passenger aircraft, Emirates also received a B777 freighter, the eighth to join its fleet, on 1st March 2012.