From December 2014 to March 2015, online users worldwide can discover, through a movie created by TBWA Paris on the dedicated website www.delseypluggage.com, the first Delsey connected concept bag. 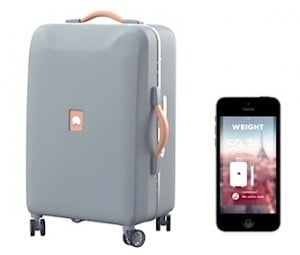 “Who hasn’t dreamed of being able to charge their phone at any time without fighting for available power points in the departure lounge?” said Albert Engler, Head Designer at Delsey. “Who hasn’t taken a plane without worrying whether their case is on board? Just like the first rigid trolley suitcase with wheels, that Delsey launched in 1972 and which simplified the lives of travellers walking the corridors of stations and airports, Pluggage will make life easier for the ultra-connected.”

Before departure, the overload indicator helps avoiding any nasty surprises relating to overweight baggage at the point of check-in and a trip checklist ensures peace of mind that nothing has been forgotten.

During the trip, the built-in charger allows you to recharge your smartphone anywhere, to stay in touch with your work, friends and family.

Once on board, the App confirms the presence of your luggage on board the plane with an alert – a ‘must have’ feature when you consider that 82,000 bags are lost each day, 26 million pieces of luggage worldwide per year.

On arrival, the verification system tells the traveller if the luggage was opened while in transit, improving safety and resulting in a calmer journey.

On site, the built-in speakers allow the traveller to listen to their favourite music.

Through the App, Pluggage is also able to inform travellers in real time of flight information and weather conditions at their destination. Finally, Pluggage has an interior lighting system for finding personal belonging swiftly, and an opening and closing digital fingerprint system.