– Only airport in Ireland to report double-digit growth in 2011

Notwithstanding massive challenges within the aviation industry in the past 12 months, Ireland West Airport Knock’s latest traffic figures show that 2011 was the busiest year in its history. In 2011, the annual number of passengers using Ireland West Knock increased by over 65,000 passengers to 654,500 – an increase of 11% on 2010. 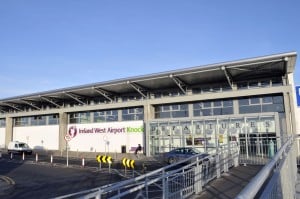 The airport predicts that the current economic conditions will continue to influence travel patterns in 2012, but that due to an expanded network of over 28 international destinations, and the recent announcements of new Mainland European services to Barcelona, Düsseldorf, Frankfurt, Milan and Paris with Lufthansa and Ryanair, the airport expects to increase passenger levels by a further 9% in 2012.

A recent independent study by Ernst & Young said that the airport supports 914 jobs in the region with an annual economic contribution of €143 million. The new services alone are expected to generate an additional tourism spend of over €23 million for the region.

Managing Director Joe Gilmore said: “We are delighted to have had a record year in 2011 and, while it was our busiest year ever, without doubt 2012 will be a challenge for everyone in the region. We look forward to welcoming the thousands of European tourists to the West and North West of Ireland, but more than ever we need the support of the trade and in particular key stakeholders at regional and national level as these new services will require even greater effort on all our behalf’s to ensure they are a success and are maintained for the longer term.”