Air Canada is to extend its non-stop service between Dublin and Toronto this summer, operating up to seven flights per week from 8th June 2012 until 14th October 2012, almost a month longer than originally scheduled.

The Dublin – Toronto service will be operated by Boeing 767-300 aircraft, offering customers Economy Class and Comfort Plus seats. From 18th June 2012, the B767-300 will be equipped with Executive First and Economy Class seats on outbound Dublin to Toronto flights on Mondays and Wednesdays, and on inbound Toronto to Dublin flights on Sundays and Tuesdays. 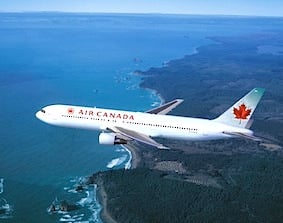 “We are pleased to serve the Irish market once again this summer,” said Robert Atkinson, General Manager – Sales UK, Ireland and Northern Europe. “Toronto has proved a popular destination with business and leisure customers in Ireland. As well as benefiting from easy access to this vibrant, cosmopolitan city, our customers can take advantage of convenient connections to destinations across the United States, the Caribbean and Latin America from our hub, Toronto Pearson International Airport.”

The schedule of the Dublin to Toronto service will be as follows (all times local) with prices starting from €675.65 return including taxes: