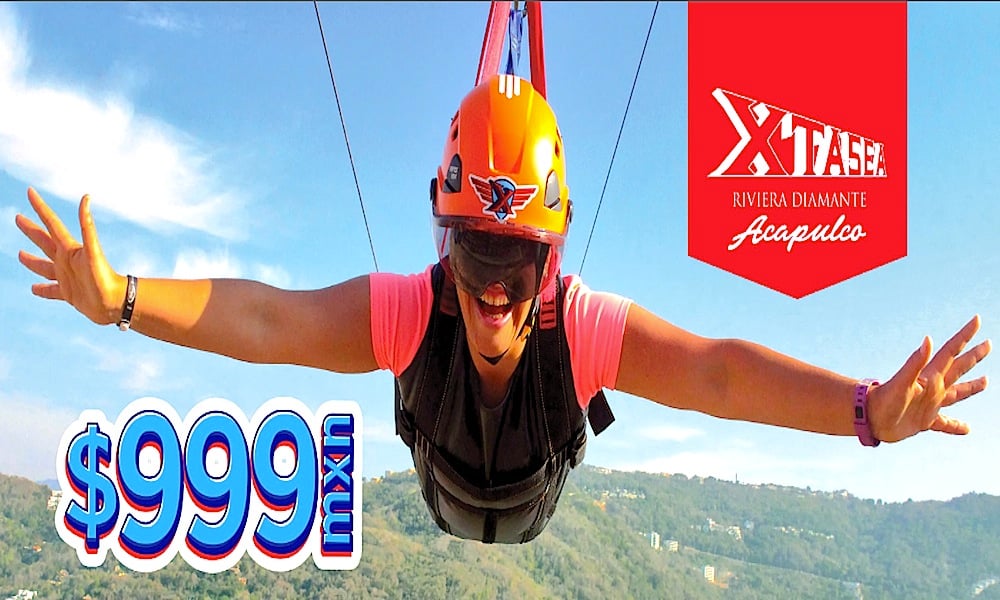 Xtasea, the new Acapulco attraction that was officially opened during Tianguis Turístico 2017, is the longest zip line in the world where you fly over the sea: the Bay of Puerto Marques. Transport takes participants from the city centre to Xtasea on the Riviera Diamante and back.

Xtasea is definitely for the adventurous at heart: four parallel zip lines start at a height of 100 metres and travel 1,800 metres above the sea at a speed of 120km/h. There are minimum requirements for those taking part (including a minimum height of 1.3 metres and weight between 45kg and 136kg) and certain prohibitions, including pregnant women, those having had recent surgeries, and…wait for it…“those suffering from heart disease, hypertension, aneurysms, epilepsy, back, neck or bone injuries, lesions, or a history of retinal diseases, severe respiratory problems and acrophobia”.

If your client fancies a ‘flight’, it can be booked on www.xtasia.mx Also at Tianguis Turístico, Palace Resorts, the company that set a high standard in 5-star, all-inclusive resort accommodation in Mexico with its Le Blanc Spa Resort Cancun, announced that another Le Blanc Spa Resort will open in Los Cabos in autumn 2017. The resort will be located 35 minutes from Los Cabos International Airport and 15 minutes from downtown, with rates starting at $850 per night for a standard double suite (www.leblancsparesort.com/en/los-cabos).

The second property in the AAA Five Diamond recognised brand comes after the success of the brand’s flagship property and Cancun’s top all-inclusive resort as designated by the TripAdvisor community. Jorge Goytortua Bores, Senior Vice President – Global Sales, Aeromexico, announced at Tianguis Turístico that the airline will increase frequencies this year to its European destinations of London, Paris and Madrid, and will also launch a new service from Mexico City to Amsterdam on 29th May 2017.

SkyTeam member Aeromexico, which serves 44 destinations in Mexico from its hubs in Mexico City and Monterrey, increased passenger numbers by 5% to 19.7 million in 2016, including an 8.4% increase in international passengers to 6.6 million.

The current fleet of 132 aircraft includes nine 243-seat B787-8 Dreamliners and four 274-seat B787-9 Dreamliners, with more scheduled for delivery by year-end. “We believe in Mexico, despite external factors from the USA, and we will be launching several new routes this year to Canada, South America, Europe and Asia,” added Jorge, “so for the first time Aeromexico will have more international routes than domestic ones.”