Travelport announced to delegates at the CAPA ‘Airlines in Transition’ CEO gathering in Powerscourt Hotel in Co Wicklow yesterday that over 100 airlines had already signed up to its industry-leading Travelport Rich Content and Branding merchandising solution. 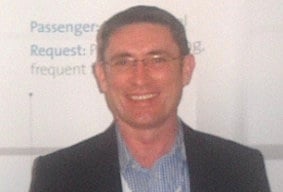 “To date 103 airlines have contracted to use Rich Content and Branding and up to 60 have already been implemented – including United this week,” Fergal Kelly told Irish Travel Trade News. “I am not surprised at reaching the 100 figure but I am surprised at the speed at which we have done so. We worked with the airlines since announcing the product last April so that they would be clear on how they could really benefit from it. Then when we launched it in November, along with Smartpoint POS, some airlines said: “That’s exactly what we want – let’s go” while others said: “That’s exactly what we want, but we never thought you would actually do it, so we will now rethink how we want to use it.”

Fergal, previously Vice President, Product Portfolio and Merchandising, was also responsible for developing and delivering the Travelport Merchandising Platform launched in 2013, and has recently been appointed Chief of Staff and Head of Commercial Strategy.

“We had listened to what airlines were saying to us and shifted to retail-centric ways of working,” Fergal added. “The financial crisis since 2008 pushed airlines to focus on how ancillaries could generate revenue for them – and these have increased from $8 billion to $46 billion last year. Airlines discovered that selling ancillaries was profitable and sustainable and began to ask how they could do that in every distribution channel. Travelport’s Rich Content and Branding enables airlines to present their value propositions through an intermediary distribution channel in the same way that they now do in their direct channels.”

Rich Content and Branding is integrated into the company’s Travel Commerce Platform, including Travelport Smartpoint agency point of sale, and enables airlines to retail their products more effectively to the global travel trade. In essence, it allows airlines to control how their products are visually presented and described to agents, using images and descriptions very similar to those that airlines provide on their own websites, in order to drive sales of core fares, as well as ancillaries, or optional extras such as bags, lounge passes or ‘next fare up’.

The benefits of Rich Content and Branding to travel agencies include potential increase in ticket sales; the ability to book through their usual, preferred booking processes, rather than having to go to an airline’s website for more information; and significant upselling opportunities on core fares and ancillaries.

Airlines to have recently signed up to Rich Content and Branding include TAP Air Portugal, LATAM and Ellinair, as well as one of the world’s largest airlines, China Eastern. The list of ‘live’ airlines includes Delta Air Lines, United, British Airways, Singapore Airlines, easyJet and Ryanair.